Pop For the Unpopular 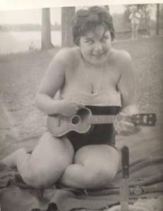 “Oh! I love dragonflies! They do my two favorite things at the same time…f*#king and flying,” said the mother of my (then) boyfriend as we sat on the beach of Leech Lake, watching two dragonflies cruise by. Leech Lake is named after a John Leech – it’s not filled with leeches. I looked at her and thought, “I’m gonna marry your son.”

It’s been 22 years since the tragic death of my mother-in-law, Kitty. She and her fiancé were killed when a semi ran a red light. I don’t know, do we grieve differently when it’s shocking like that?

The year after Kitty died, I felt the strong need to do a ceremony of some sort, and decided to get a tattoo in her honor. She had a tattoo on her right arm – she wanted to show that she was cool in case she was ever infirmed…

things I have said

Meditations on Philosophy, Strategy, and Life

A Conversation Without Boundaries

A Collection of Articles and Thoughts

Dig Up The Roots

The Dan and Dave Show

Follow Harris and his parents in his first year

Projects past, present and future from Jerry Modjeski

Left Of The Dial