You can see where I get my glam thing

So my Mom would’ve been 80 yesterday (I think, if my math is correct…as she well knew, I suck at math) and I miss her like crazy. She had Alz which started about a couple of years or more before she passed, so the grieving process of “losing” her really started long before she died. It was brutal for my family to see her go from a sassy, quick-witted, life-of-the party “everyone’s Mom” to a person we just didn’t know; one fearful of her house and unaware of her surroundings. She would sort of go in and out of the dementia at times though – we had her in assisted living and, during one of my visits to Detroit to see her we were taking her back to her room. She didn’t want to go back in and we were trying to convince her it was ok. She looks at me and goes, “that woman in there (pointing to her room which she occupied alone) – she’s very, very ill…she needs to MACK THAT OUT with her doctor….” I’m like, “Mom did you turn into a pimp all of a sudden? Mack that out???” She goes, “You know, mack that out…” My sister’s boyfriend was standing behind her and I thought he was gonna bust out laughing.

Her personality would just pop in sometimes, seemingly out of nowhere. One of my brothers and sisters had taken her to the emergency room one day because she had fallen and hit her head. They had to wait a really long time to get in to have her examined and I guess she was just out of it and really acting ornery and squirrelly. My brother gets up at one point and says, “I’m going for coffee,” and she says, “oh, hurry back, wizard,” a term she used to always tease him with when he had fucked something up. Then they all just started laughing their asses off, including her. Demented levity.

My Sunday afternoons used to include a 2-hour conversation with Mom – every week we’d have a gab fest and she’d keep me up-to-date with the latest family doings. She’s been gone for 3 years now. It gets a little easier with time I guess, but we mark these dates like birthdays, dates of deaths and other occasions with a little bit of bittersweet melancholy.

And I’m mackin it out.

My friend J. Otis is recuperating from a serious illness and this campaign to raise money to help pay for some of his expenses is over the half-way point to meeting its goal. Please contribute and help out one of the Twin Cities’ greatest talents. Thank you very much.

THIS JUST IN: To my peeps in the Twin Cities – there is a fundraiser being held at Intermedia Arts, here is the info:

Members from the community are coming together to produce a benefit show honor and celebrate local treasure J. Otis Powell‽ on Wed July 15th at Intermedia Arts (7pm). We would love to have you there to witness & contribute to the wall poetry/word/image mural that will hang in J. Otis’s recovery room. Come commune, jam and celebrate with us.

….that pivotal moment or concert that changed everything? When you fell in love with music? Some friends of mine and I were talking about that last night, and I was just drawing a blank. I mean, obviously, something happened to me and I was influenced by a lot of things in the late 60’s when I was a little kid in New Jersey and then being a teenager in Detroit in the 70’s. But it seems like people I know can speak to a show or record that informed them from that moment on. And I couldn’t think of anything.

Well, I just remembered it. Quite possibly I had trouble recalling it because I was 9 years old. I was laying in the back of my dad’s Ford Country Squire station wagon (with faux wood on the sides, of course.) I had this habit of putting my ear right on the speaker after begging my dad to tune in to WABC New York. River Deep Mountain High came on, and it blew my mind. Nothing was the same after that. Mind you, I had been listening to the Beatles, Rolling Stones and Monkees and I was wild about all that, but RDMH had something in it that sent a shiver down my spine, and I knew I’d be in love with music for the rest of my life.

Lisa and The Lips (the Funky side of Bob and Lisa) and, of course, THE BELLRAYS!!! Come back to the Midwest, why doncha? What’s so great about Europe and Australia??? Oh, yeah. 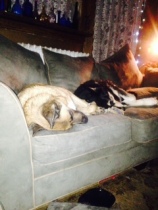 These guys, I tell ya. I look over at them and my old hardened heart just melts. They are attached at the hip.
Speaking of hips, Egor (the pointy eared chow chow fella) had hip dysplasia – as bad as it gets – when he was all of 9 months old. That was a quick $3,000 that we didn’t really have – oh man, ouch! We were at a backyard party and several dogs, all puppies, were running and running and all of a sudden there was a painful yelp…oh I can still hear it. We rushed Egor to the emergency vet – of course, it was on a Saturday night. So we had them do a bone scraping sort of operation to make the hip joint fit better – he’s been fine ever since – he runs a little wobbly is all. They told us to always be aware that he might have trouble on the opposite side, and to keep a lookout. Seems ok, so far, and he’s six years old.
Iggy’s the healthiest pet I’ve ever owned. I believe it’s because he is so expressive and lets his emotions out so frequently (not unlike his namesake.) This dog moans and groans like no other dog I’ve ever seen. Didn’t pet him enough? Harumph, I’m walking away now. I didn’t get two cookies? Hmmmm. I’m just gonna sit over here and pout. Did you just pet Egor and not me? Mmmmmm, me no likey.
Of course, I get accused of anthropomorphizing these two all the time. “They’re dogs, Patti.” “Yeah, I know. But they’re my boys, they’re my special boys.” “Sheesh.”
I know. I’m a dog ma lunatic.

Happy 22 years of marriage (most of them blissful) to my Machinist Man – weren’t we cute? This pic was taken at his brother’s wedding – we’d been hitched for a few years already – but we still looked fresh I guess. I think I look really domineering in this photo – I’m not, really! We have a pretty good balance in our dealio – he cooks, I clean – we bounce off of each other, mood-wise. We’ve been through hell together – some really great tragedies. And also some great joys, as well. Mostly what we’ve been…is there for each other – always.

My Mom’s parents, Alice Murphy Kennedy and Robert Kennedy (yeah, I know) were a very big part of my rearing. We drove to their house in Harrison, New Jersey, every Sunday after mass to have dinner. Dinner, watch Disney, Ed Sullivan, drive back to Midland Park. Every single Sunday.

I adored my Nana Kennedy. She taught third grade in the Kearney School District, and I can remember being pretty little when she brought me into her class and I sat up on her desk like I was “show and tell.” Her kids fawned all over me, and I recall feeling pretty special.

Nana and Pop-pop had a special playroom right off of the kitchen – it was really tiny and I loved it – it had a toy chest and a little desk with crayons and construction paper. My brother Michael and I would spend hours in there while my Mom and Nana, and sometimes their next-door neighbor, Ta Baker, were gabbing in the kitchen, drinking cups of percolated coffee and smoking. Well, Ta didn’t smoke, but Mom smoked Tarringtons (I’d rather fight than switch,) and Nana smoked Salem menthols (Take a puff…it’s springtime.) Sometimes they’d have some coffeecake, or crumb-bums, as Nana used to call them. Mmmm, New Jersey, bakeries, crumb-bums. Heaven.

I think my sister Christine, who was about 9 months old, was crawling around in the playroom sometimes – she probably wasn’t being watched very well. We were busy coloring; I don’t think we were responsible for her…. And in the kitchen there was so much gossip to get caught up on, you know? Christine grew into one of the strongest, most self-reliant, independent women I’ve ever known, so maybe this baby neglect was useful in the long-run.

Pop-pop was a rather curmudgeonly character with coke-bottle glasses. He was an avid reader of history books, loved to golf, and was constantly puffing on a big, fat stogy. In his youth, he sang in a barbershop quartet. He was a terrible driver and cussed like a sailor. Despite his gruff exterior, he was a total creampuff and oh boy, when Christine was born, was he ever enamored with her! I’m sure he loved all of us, but was very taken with Christine – I think all grandparents have their special grandkids – not all of them show it like Pop-pop did. Like I said, total creampuff.

Fast forward to 1990-something. Nana and Pop-pop long gone. I was visiting my Mom and came across my Nana’s grey curly Llama coat that she wore for years – oh, it was so her. I took it out of the closet and put it on – it smelled like cigars – man, the floodgates opened. My Mom said go ahead and take it. I’ve had some work done on it – it was sort of falling apart. I’ve had it dry-cleaned I don’t know how many times, but I can’t get the cigar smell out. I’m not sure I want to.

things I have said

A Conversation Without Boundaries

A Collection of Articles and Thoughts

Dig Up The Roots

The Dan and Dave Show

Follow Harris and his parents in his first year

Projects past, present and future from Jerry Modjeski

Illustrated Encyclopedia of Audio Terrorism / Left Of The Dial